Earlier this year, a judge ruled that Alaskan election officials were in violation of the Voting Rights Act because they did not provide election materials in two dying indigenous languages. They were given until this Friday to comply with the ruling.

The court's decision applies to everything from the buttons that poll workers wear that read "Can I Help?" to candidates' statements to the ballots themselves. There are four regional election pamphlets that are more than 600 pages, and they must be translated into Yupik and Gwich'in.

While the translations into Yupik and Gwich'in are a huge undertaking for Alaska's Division of Elections, it could help save two dying languages. But there are some hurdles.

"Some of it is very technical language, legal jargon, and [it] can be difficult to translate into our language," said Allan Hayton, who is charged with translating the material into Gwich'in. That language is completely unrelated to European languages, and it has its own vast vocabulary. Another wrinkle: There are lots of words that don't exist at all in Gwich'in — terms like "commerce," "marijuana" and "Department of Natural Resources."

Adding modern concepts to languages that are thousands of years old is something Marilyn Savage, Hayton's colleague, said she never really considered, but she understands the necessity.

"I always thought our language was for, you know, people from ancient times and that it was just their day-to-day language for day-to-day living," she said. "Now we're in a century that's pretty high-tech."

Gary Holton, a linguist at the University of Alaska, Fairbanks, says the language doesn't even describe the very concept of elections. "If you were going to set out to design a language that was as different from English as possible, you would probably come up with something like Gwich'in," he said.

(Editor's note: Listen to the audio above if you want to get a sense of what some of those election materials sound like when spoken in Gwich'in.)

Normally, a dedicated language agency would discuss how best to create new terms, but no such group exists in Alaska. But Holton said this kind of project could help add new vocabulary to the language.

It's unclear how many of the state's 300 native Gwich'in speakers or how many of its 10,000 speakers of Yupik will turn out to the polls next month. But Savage, who worked with Hayton last year to translate Shakespeare into Gwich'in, is working with him again on this translation project. She said the work is more personal this time. "Some people will say, 'Oh, did you go to vote? It's in our language now, you know,' " Savage said. "So I'm pretty excited about it, yeah." 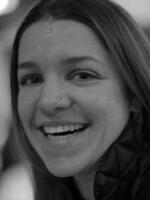 Emily Schwing
Emily Schwing comes to the Inland Northwest by way of Alaska, where she covered social and environmental issues with an Arctic spin as well as natural resource development, wildlife management and Alaska Native issues for nearly a decade. Her work has been heard on National Public Radio’s programs like “Morning Edition” and “All things Considered.” She has also filed for Public Radio International’s “The World,” American Public Media’s “Marketplace,” and various programs produced by the BBC and the CBC. She has also filed stories for Scientific American, Al Jazeera America and Arctic Deeply.
See stories by Emily Schwing