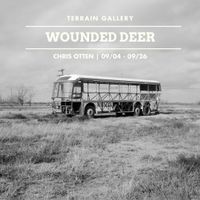 Chris Otten's concerns as a photographer center on the relationship between the rural lands of the American West and its loss within an ever-expanding society. Society has sacrificed memory and its artifacts to the concrete giants of civilized growth. There are many overlooked histories that are embedded within this frontier. It is his hope that audiences not only appreciate the meaningful documentation of these arid lands but will also consider how the original inhabitants were affected by manifest destiny. By documenting sites in conjunction with constructing fictional tableaus, he invites viewers to reimagine the American West.

Bio
Chris Otten's work deals with issues of identity and place, the relationship between the two, and how memory plays an important role in how we remember home and who we were while we were there.