When researchers at Washington State University set out to find where Canada lynx are living in Washington, they’d hoped to find more of the medium-sized cats.

“I think there’d been quite a bit of concern among lynx researchers and agencies about the status of lynx in Washington,” said WSU professor Daniel Thornton.

In a study recently published in the Journal of Wildlife Management, Thornton and lead author Travis King found that lynx only occupy about 20% of potential habitat in Washington.

King, a doctoral student at the time, covered about a quarter of the state, driving and hiking to potential lynx habitat. Once there, he’d set up trail cameras hoping to capture the elusive lynx or its prey, such as snowshoe hare. They set up the cameras on roads and trails considered “movement corridors” for lynx and other wildlife.

It was the first time researchers conducted such a large survey of lynx habitat in the state.

With help from agencies and groups like the U.S. Fish and Wildlife Service, Washington Department of Natural Resources and Conservation Northwest, King picked out spots on maps that looked like good habitat. Getting there was a different story, he said.

“It was everything from easy, where you’re just driving up, placing a camera, hopping on to the next site, to very difficult, where you’re hoping you’re not falling off a cliff and you’re climbing over trees all day long,” King said.

“You’d run into an unknown forest fire that happened the year before and it has that road closed down, or you have hundreds of trees that have blocked one road,” he said.

It’s those threats from large forest fires, increasing temperatures due to climate change and decreasing snowpack that are causing big problems for Washington’s lynx population.

“(Lynx) are a cool-adapted species. They’re reliant on cold, snowy winters,” Thornton said. “That’s the exact kind of sentinel species for the impacts of climate change that is going to tell you what’s going to happen long-term to lots of biodiversity in the state.”

On the other hand, warm-adapted species, such as bobcats and coyotes, could benefit from warming temperatures, Thornton said. 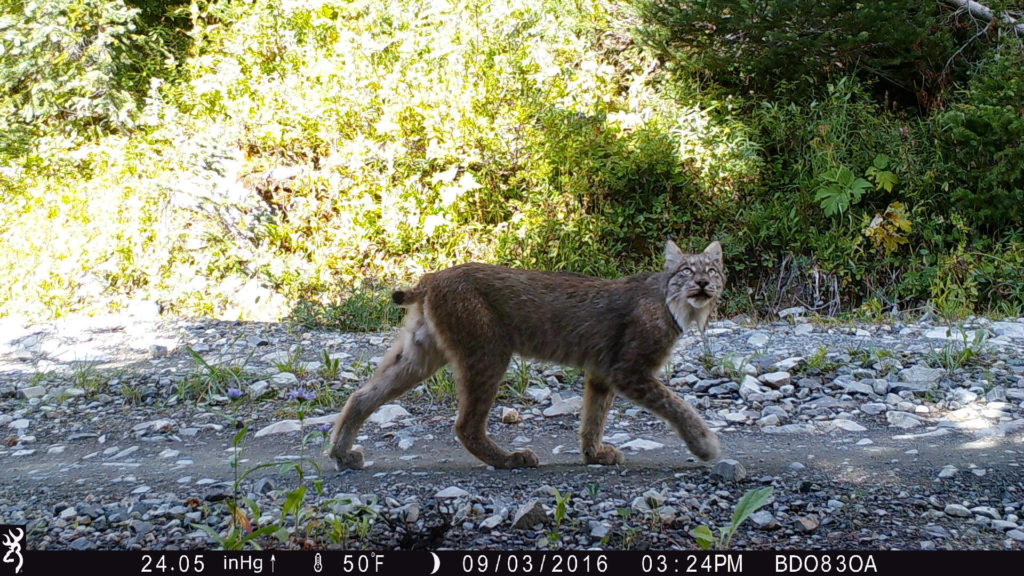 A Canada lynx in Washington state as captured in a large study by WSU researchers. The team’s 650 wildlife cameras caught plenty of other wildlife, including bear, cougar and moose. CREDIT: WSU Mammal Spatial Ecology and Conservation Lab

“There’s going to be a reshuffling. And for those species that we really want to keep around that we view as having an important role, that are more on the cool-adapted spectrum, there are certainly going to be challenges,” Thronton said.

King’s research shows some areas will still be suitable habitat for lynx as the climate warms. Those areas should be managed long-term, Thornton said.

It’s a good reason to keep up monitoring studies like this, according to Thornton. That was one reason the researchers chose to use non-baited trail cameras – to make future studies easier.

“I put over 30,000 miles on that field vehicle alone,” King said. “And went through plenty of pairs of boots and many nights in the field.”

The team put out 650 movement-triggered cameras over 4,300 square miles. They collected more than 2 million images of “wildlife, wind, people and everything in between,” King said.

WSU undergraduate students helped sort through all those photos.

“Each (photo) gives us information about: are there lynx and what other species might be living across this landscape?” King said.

Although it’s complicated to predict lynx habitat, King looked at various emissions scenarios and what that might mean 50 to 100 years in the future.

“At our later timesteps, regardless of emissions scenario, we saw a 60 to 90% reduction in lynx habitat, or projections (of) where lynx would live on the landscape,” King said. “Just in and of itself, those kinds of reductions tell a tale that lynx are in a really precarious situation here in Washington state.”

The forward-looking projections only considered climate model projections of snow, temperature and precipitation. They didn’t speculate about increased fire frequency or changes in habitat connectivity with British Columbia, which are other major threats to lynx habitat.

Researchers found that lynx generally avoided habitat that’s been burned by large fires for up to 20 years. But they weren’t able to look further back to see how long it took for some burned landscapes to fully recover, King said.

Scientists continue to survey these same areas for lynx. They’re also treading deeper into the wilderness and areas they weren’t able to reach in this last study.

King thinks the study is important nationally. A 2018 assessment found that lynx could be removed from the  federal Endangered species list. Right now, lynx are still listed as threatened federally.

“Keeping a protected status for lynx may be very vital in maintaining this population here in Washington,” King said. “A lot of the characteristics that we see in Washington state are applicable to most of the western United States.”