Grays Harbor County, Washington, is the first county in the Northwest to strike back against pricey recreation permits now being required by some large timber companies. The county's commission voted unanimously Monday to take a tax deferral away from private timberland owners that charge for public access. 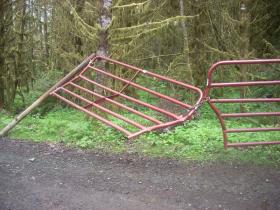 This spring, timber giant Weyerhaeuser announced it would switch most of its Western Oregon and Western Washington tree farms to access by permit only during hunting season. Permit prices range from a low of $75 up to $550 per tree farm.

Upset hunters like Steve Bova crowded into the county commission chambers in Montesano, Washington to vent their frustration.

"What these corporations are doing is turning a great sport into a wealthy man only sport," Bova said.

The protests convinced the county commission to reclassify tree farms that charge for access into a higher property tax bracket.

"If the large timber companies can't charge a fee, their next option is probably cutting off access completely," he said.

Other county commissions under similar pressure from constituents say they'll watch what happens to the Grays Harbor County ordinance before possibly following suit.

Both sides now expect a lawsuit since Weyerhaeuser has previously indicated it believes the county action runs contrary to state tax law.

Even County Commissioner Frank Gordon, who voted for the tax change, expressed doubts in its legality. He explained his intent was to bring Weyerhaeuser to the bargaining table to negotiate what he termed more reasonable recreation access fees.