Donors Pay To Test Seawater For Traces Of Fukushima Radiation

It's been more than three years since the Fukushima nuclear plant accident resulted in a spill of millions of gallons of radioactive cooling water into the Pacific. Oceanographers projected that it could take until this year for highly diluted traces of that spill in Japan to reach the West Coast of North America.

Radiation experts don't believe there is cause for alarm on our shores, but some coastal residents are stepping forward to pay for seawater testing just to be sure.

'I Don't Really Want To Die' 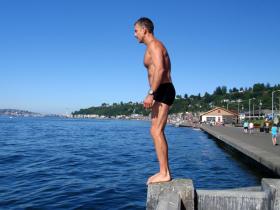 The presence or absence of Fukushima radiation in the water can hardly be more personal than it is for open water swimmer Wayne Kinslow of Seattle.

Kinslow swims about 20 minutes per day in Puget Sound. So he dug into his own pocket to the tune of $550 to finance an independent water test. It came back "non detect" for nuke plant radiation.

"This was something that was really important to me because I'm out there ever day and I don't really want to die," Kinslow said. "So it is best to test the water and this is my chance. As soon as we got an opportunity, I just threw all my money at it for the first sample."

Kinslow is not the only one willing to pay big bucks for reassurance. Portland high school art teacher Terry Waldron is fundraising to test the waters near her and her husband's second home in Newport, Oregon.

"For a while, I thought about not eating fish," she said. "I can't do that. But I was so concerned because I couldn't find information. I do eat fish, I do. But I still want that test done."

Waldron and Kinslow signed on to a crowdfunded radiation monitoring project called Our Radioactive Ocean. It is managed by Woods Hole Oceanographic Institute. Donors have ponied up for testing at about 30 sites from California to Alaska.

Waldron and Kinslow say it's a lot of work and slow going to get others to contribute to this cause. That might have something to do with the fact that scientists and government agencies have been consistent in saying not to worry.

'We Are Not At All Concerned About It'

"With the samples that we've taken along the West Coast, we don't see anything of concern. We don't expect to see anything," Kathy Higley said. She is a professor of radiation health physics at Oregon State University.

Higley said graduate students in her department are looking for Fukushima radiation, but not out of fear, rather out of academic and scientific interest. Isotopes released in the accident can be used as tracers to study ocean circulation and fish migration.

This summer, Delvan Neville, one of Higley's PhD students, collected seawater samples and various fish on a research cruise off the Washington and Oregon coasts. He is now analyzing these in Corvallis.

The samples go into a really sensitive detector covered in lead bricks. They have to sit inside the chamber for days to generate a result.

"It takes a long time to count it because there is so little activity present," Neville explained. "Even in the worst case model, there may be just a few Becquerels at most of cesium 137 on the detector."

Neville said for perspective it helps to remember we're surrounded by low levels of natural radiation.

"Several seconds in a stuffy basement was a larger dose than consuming a year's worth of albacore," he said. "People are not aware of all the things around them that are radioactive. They don't consider themselves radioactive."

State public health agencies are also testing seawater for Fukushima contamination. Oregon results show nothing abnormal. Washington's latest results are pending. But it seems these efforts have not fully penetrated the public consciousness.

"Given this concern and the numerous requests for information, I just decided if we could do this with crowdfunding, we could do this quickly and get people the information they want and basically let them select their beach -- their favorite site -- for analysis," Buesseler said.

He said in his more than 30 years in ocean science, he's never crowdfunded a research project before. But on this one, he said he was unwilling to wait for government grants to come through given that models show a highly diluted Fukushima plume could be arriving now.

"I am concerned with radioactivity. It can be quite dangerous, but not at the levels we are expecting off the West Coast of North America," the Woods Hole researcher said in explaining where he is coming from.

'An Opportunity To Get A Little More Information'

"In our minds, this is ground truthing the model, which should happen with every model (of dispersal)," Tillamook Estuaries Partnership executive director Lisa Phipps added. "Our hope is that what we find is in line with the model."

"It was an opportunity for us to get a little more information. It was certainly timely," Phipps explained.

The Our Radioactive Ocean project and the other ocean monitoring looks for what scientists call the nuclear "fingerprint" of the Fukushima reactor -- a combination of two isotopes of cesium.

One other project involving patched together funding and in-kind contributions is underway along the West Coast. It uses kelp as a coastal detector. Kelp Watch has expanded from its genesis at several California universities to include sampling for cesium on the Olympic National Park coast and Vancouver Island.

Why kelp? The project website explains, "brown seaweeds are known to concentrate Cesium , Strontium and Iodine into their tissues." All of the kelp fronds processed to date showed no signs of Fukushima radiation.