A federal threatened species listing for the wolverine is looking increasingly unlikely. 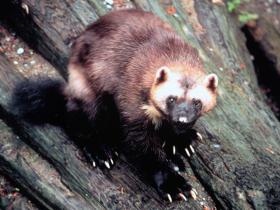 Last year, federal biologists proposed listing the wolverine as a threatened species in the Lower 48 states. The main reason: because climate change is likely to shrink the snowpack the furry carnivores depend on, including for their dens.

But late this spring, U.S. Fish and Wildlife Service regional director Noreen Walsh urged that the proposed listing be withdrawn. Walsh wrote in a memo that it relies too much on “speculation” about future climate impacts.

The top boss at the agency, Dan Ashe, sounded dubious as well during an interview this week at a Society for Conservation Biology conference in Montana.

“With wolverine, we know climate is changing," Ashe said. "We know that is having an effect on the snow that they use -- that we believe they use. But in fact, we see a rise in the population. The population has been increasing for a decade or more, as long as we’ve been measuring it.”

Ashe has until August 4 to render a final decision.

“Listing is often unpopular in the states," he said. "You know, it is seen as a federal intrusion. It is seen as potentially affecting economic activities."

Greenwald said the Fish and Wildlife Service is caving to political pressure.

“They (USFWS) get their funding from Congress. So if they have Congressional delegations from states hopping mad at them, that is something they pay attention to,” he explained.

Idaho and Oregon are among the state governments who question whether federal protection under the Endangered Species Act is necessary.

Idaho Department of Fish and Game biologist Beth Waterbury said the states are doing a good job as shown by the wolverine’s expanding numbers and range.

“We feel that wolverine are doing quite well in Idaho," Waterbury said. "We want to keep them on the landscape and we feel that state management is entirely appropriate for this species.”

Last week, the Idaho Fish and Game Commission unanimously approved a wolverine conservation plan to show the feds that the state is “proactive” and committed to protecting the rare mammal.

Comments submitted by the Idaho governor’s office to the USFWS strongly objected to the use of climate change as grounds for a listing, which is reminiscent of an earlier national debate about whether to give endangered species protection to polar bears for the same reason.

“Listing the wolverine based on climate change does not comport with ESA regulations and does not provide a path towards recovery,” wrote Dustin Miller from the governor’s Office of Species Conservation.

“In addition, and perhaps more importantly, the ESA does not provide the wolverine with any additional substantive protection that cannot be provided by the states, and listing based solely on climate change does not allow the Service to develop a meaningful recovery plan for the species.

The State of Idaho is well equipped to monitor and manage the species without federal protection, especially considering the fact that the ESA cannot halt climate change.”

Speaking at the same conference where Ashe appeared, environmental advocate Greenwald said in an interview that "it is an open question whether the Endangered Species Act can address climate change, whether it can address emissions." He argued “a short term” population upswing does not preclude consideration of climate models that show declining snow packs thought necessary for wolverines to flourish far into the future.

Other potential threats include disturbance from winter recreation such as snowmobiling, road development and incidental mortality from trapping. Idaho, Washington and Oregon all confer high levels of protection to wolverines under state law and ban hunting and trapping of the animal.

In the early half of the last century, wolverines were more or less wiped out across the West by trapping and deliberate poisoning. Despite their comeback, you’ll need incredible luck to see one in the wild. Adults are about the size of a lanky bear cub.

To be precise, the wolverine is actually the largest member of the weasel family. The government estimates there are between 250 to 322 wolverines on their current range in Oregon, Washington, Idaho, Montana and Wyoming.