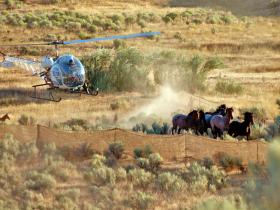 The government’s wild horse program was set up decades ago to prevent starvation and overgrazing. This year’s tentative herd management schedule calls for the BLM to remove 35 wild horses in Idaho and 100 mustangs and burros in southeastern Oregon. That is down from gathers of several hundred horses at a time two to four years ago.

Lori Eggert, a biology professor at the University of Missouri, said a new approach is needed.

“The path we are on right now where we continue to allow these horse (populations) to grow at 20 percent per year is going to end up with more and more horses in holding," she explained. "You cannot have that situation. That is not sustainable.”

Eggert took part in a National Academy of Sciences review of the federal government’s faltering wild horse program. There are no quick fixes, but one of her group’s recommendations was to increase the use of birth control injections on wild mustangs.

“The BLM is not going to be able to reduce the growth rate without contraceptive control,” Eggert said Monday during a presentation of the scientists’ report at a Society for Conservation Biology conference in Missoula, Montana. 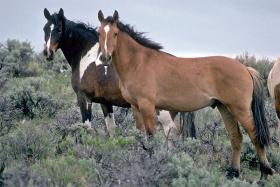 Speaking from Boise, BLM spokeswoman Jessica Gardetto said her agency “is still assessing how to continue the wild horse program.”

She said the Idaho herd to be captured about a month from now by bait trapping is congregating in one small area of the Owyhee foothills. “We’re hoping to have all 35 of the animals to be removed adopted” after they clear a health check, Gardetto said.

The BLM Wild Horse and Burro program has long been beset by controversy. Animal rights groups accuse the government of removing horses at taxpayer expense to make room for more livestock grazing. Ranchers, native tribes and some state natural resource agencies counter that the wild herd management is not aggressive enough and that the non-native mustangs trample valuable habitat down to bare dirt. Public pressure and Congressional directives prohibit the killing of healthy horses.

The BLM statement outlining its 2014 schedule for wild horse removals bemoaned the straightjacket the public agency finds itself in despite worsening drought conditions on the range.

“This will exacerbate the difficult challenges we face in nearly every aspect of the wild horse program right now. For example, in 2013, adoptions of wild horses and burros were just 2,671, while nearly 50,000 animals remained in BLM care, at an annual cost of more than $46 million,” the statement reads.

The BLM estimates it currently holds more mustangs in captivity than roam free in the West.