Hanford Vapors: It's Still Difficult To Track Down The Solution

Since the spring, a run of workers at the Hanford Nuclear Reservation have needed medical attention from exposure to chemical vapors. On Thursday, the U.S. Department of Energy led a bus load of journalists to points across the site to show off what they’re doing to keep workers safe. 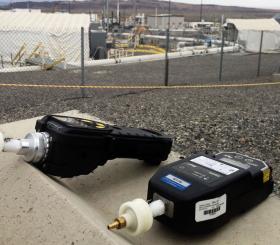 Top-level Hanford managers smiled as they donned the protective outfits needed at the site’s tank farms. They’re the white jumpsuits with taped up booties and canned air, like you see in the movies.

The tank farms are where Hanford stores the sludgy leftovers from making plutonium during World War II and the Cold War. But the farms are on a bad press roll lately. An increasing number of workers have been complaining of sore throats, trouble breathing and headaches. Some say their bosses aren’t doing enough.

Tank farm manager Tom Fletcher took the media-day opportunity to say managers don’t want to make their workers clumsy or overheated with too much protective gear. But they still want them safe.

Air monitors have taken 12,000 air samples since March. None have tipped the federal scale for too much worker exposure. Still, experts here admit the human nose is way more sensitive than even their best machines.

Hanford officials say a draft federal study on the vapor problem at the site’s tank farms goes public this fall. On July 19 in Richland, Hanford workers will share their experiences with chemical vapors at a public meeting.