Legal Pot Prices May Be High To Start

Marijuana users may pay some high prices to get high when Washington state’s legal pot market launches next week . The initial price-per-gram could be nearly double what medical marijuana card-holders pay. 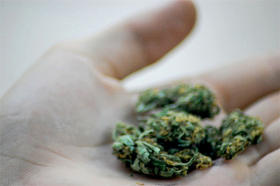 Generally speaking, medical marijuana goes for $10 to $15 per gram -- about two quarter-sized nuggets -- in Washington. But recreational users who want to buy legally at Washington’s new pot stores may pay double that -- at least initially.

“Many people have complained about that," Lathrop said. "In reality, I mean we’re talking a twenty. I think that’s great. You spend $20 on a bottle of wine.”

Prices are expected to come down as more stores open and the legal supply becomes more plentiful.

Earlier this year, Washington lawmakers considered rolling the state’s existing medical marijuana marketplace into the new recreational one. But that didn’t pass. The idea is expected to return in the next legislative session.