In just a few years, Washington will need another 1,000 prison beds. There’s been talk of building a new state lock-up, but that would cost hundreds of millions of dollars at a time when the Supreme Court has said school funding must be the priority. 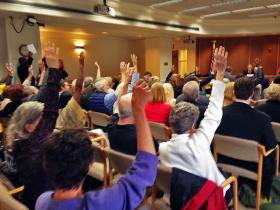 So what’s the solution? Washington could release some older inmates who are serving long sentences. But lawmakers are wary of a political backlash and the state abolished parole in the 1980s.

That leaves clemency as the remaining pressure-relief valve on the prison system. And that system of mercy may not be up to the task.

The Washington State Clemency and Pardons Board currently receives 60 to 100 petitions a year. Many are from past inmates requesting a pardon for their crime. The others are from current inmates who want to be let out early -- the term is commutation. Typically about a quarter of the petitions are granted a formal hearing.

Four times a year, the human dramas and real life crime stories play out when the clemency board meets on Washington’s Capitol Campus. Jennifer Rancourt, the current chair, said the volume of petitions is manageable for now, but she worries about the future.

“I mean it is a five-person, volunteer board," Rancourt said. "Most of us have full-time jobs outside of this. We put as much time and thought as we can into this process, but at some point I do think at some point it’s going to become overwhelming.”

That’s because Rancourt has seen the stats. The number of Washington inmates over age 55 nearly doubled in the past decade. She anticipates more and more of them are going to want their sentences reviewed. But Rancourt isn’t sure the Clemency Board is up to the task.

“I think that as it’s currently structured it’s going to be very difficult to deal with that volume,” she said.

Pressure On The System

Washington’s Clemency and Pardons Board was created 30 years ago. That’s when the state did away with parole and transitioned to determinate or fixed sentencing. Later, Washington adopted mandatory minimum sentences like "three-strikes-you’re-out" and "hard-time-for-armed-crime." All of this has put pressure on the system. And clemency is the primary relief valve.

Take the case of Stonney Rivers, who petitioned for clemency in 2011.

Rivers is an inmate at Cedar Creek Corrections Center and has an amazing -- and depressing -- story to tell. It turns out he and his brother, his half-brother and his step-father were all sentenced to life without parole under Washington’s three-strikes-you’re-out law. Records show their crimes were mostly street level felonies.

“We did wrong, we were young, we were rambunctious," Rivers said. "We were committing robbery and theft and assault.”

Today, Rivers is 47 and soon he’ll be leaving prison. That’s because he’s one of the lucky 13. That’s the number of Washington prison inmates who’ve been granted clemency in the past decade.

During that same time, more than 50 inmates were denied. Several of those petitions crossed the desk of attorney Richard Mitchell. He was general counsel to former Governor Chris Gregoire and advised her on matters of clemency. Since then, Mitchell has represented petitioners going before the board. Having seen the system from the inside and out, he believes Washington’s clemency process needs an overhaul.

One of Mitchell’s chief concerns is the test for clemency. The law says the inmate must demonstrate “extraordinary circumstances.” But that has never been defined. Mitchell also believes the Clemency Board should function more like a judicial body. And he wants inmates to have legal help in crafting their case for mercy.

He recalled when he worked for Governor Gregoire seeing handwritten jailhouse petitions.

“It was clear to me the petitioner had a case to present, but was not presenting it in a way that was very persuasive,” Mitchell said.

Mitchell said the opaqueness surrounding clemency doesn’t just disadvantage the offenders. He believes it hurts crime victims and their families too. For them, clemency hearings can serve as a recurring nightmare.

Take the case of Barry Massey -- a case Mitchell has worked on. Massey was 14 when he became the youngest juvenile sentenced to life without parole in the nation. In 2010 he came before the Clemency Board for the second time in four years. The widow of Massey’s victim, Shirley Wang, begged the Board not to release her husband’s killer.

“Why should this murderer be given the chance to have something that he took away from me and my two children,” she said.

Massey later withdrew his petition for clemency. He’s now likely to be released under a new state law that gives juvenile killers an automatic review after 25 years behind bars.

Washington lawmakers have considered whether to grant automatic review to other categories of long-serving Washington inmates. But those ideas haven’t gone anywhere.

Amanda Lee, a former member of the Clemency Board, recalls her time on the board as "eye opening.”

Lee said it’s no easy task to recommend mercy for a prison inmate -- and she’s a criminal defense attorney by trade.

“This isn’t like an Innocence Project thing," Lee said. "It’s the exact opposite. Someone who’s not innocent, but maybe the time has come to look at whether early release is appropriate.”

The Board can only recommend. It’s the governor, and the governor alone, who holds the power to grant mercy. And Democratic Governor Jay Inslee has just announced a broad review of Washington’s criminal justice system.

“This is a continuation of getting past the rhetoric of soft-on-crime or hard-on-crime and really being focused on being smart on crime,” he said.

At this point there are no proposals to beef up the Clemency Board. Although, the governor’s office is revising the guidelines for clemency so that both petitioners and victims have a better understanding of how the process works. And what the Board is looking for.