No Medals, But Golden Memories For Northwest Athletes At 2018 Winter Olympics

The Winter Olympics ended on Sunday under a shower of fireworks with athletes waving flags and dancing exuberantly to K-Pop music. None of the 13 athletes with Pacific Northwest roots who competed in PyeongChang won a medal. But they seem to be coming home happy anyway.

Snowboarder Ben Ferguson of Bend, Oregon had the best finish of the Northwest Winter Olympians. Ferguson came in fourth in men's halfpipe, which was won by U.S. teammate Shaun White.

Decorated short track speedskater J.R. Celski of Federal Way, Washington, was expected to contend for medals, but he failed to advance out of the preliminaries several times. Celski set disappointment aside and said he was thankful.

"I feel blessed to have represented my country, family, friends, team, sponsors, fans, and the countless number of people that I have gotten to build with along the way," Celski said in what turned out to be a common refrain.

Cross-country skiing siblings Erik and Sadie Bjornsen of Washington's Methow Valley raced in a combined eight Olympic events. They didn't earn any medals, but whooped it up when training partners on the close-knit Nordic team got the USA's first ever Olympic cross-country skiing gold medal last week.

The near future for a bunch of these Olympians entails hitting the books. Alpine skier Laurenne Ross has enrolled for spring term at the University of Oregon where she plans to study art. Skier Breezy Johnson will return to Western Washington University for spring quarter, where she is a sophomore. The Bjornsen siblings will return to Alaska Pacific University where Sadie is pursuing a master's degree in business and Erik is finishing up his undergraduate studies, also with a business focus.

Here's a look at how each of these athletes performed at the Winter Olympics:

Bjornsen, 28, competed in four events on the hilly cross-country ski course. She placed 15th in the 10-kilometer freestyle, 14th in the classic-style sprint, 17th in the 30-kilometer mass start classic and raced a middle segment of the women's 4 x 5km relay. The PyeongChang Games were her second Winter Olympics.

"Chasing the dream, believing wholeheartedly, and giving all your best is something I’ll cherish forever," she posted on her Instagram account. "This team is so much larger than a result, a medal, or a number. I’m so proud to be part of something so powerful and amazing."

The younger half of the brother-sister combo from Washington's Methow Valley competed in four individual and relay events in PyeongChang. Bjornsen's best individual finish was 25th place in the men's classic-style sprint. He crossed the line in 41st place in the men's 15-kilometer freestyle race. In the skiathlon (a combo of classic and freestyle), Bjornsen placed 42nd. He participated in the team sprint where the U.S. men finished in sixth place.

This was Bjornsen's second time at the Olympics and he may well return again since he is only 26-years-old.

Celski was a double bronze medalist at the 2010 Vancouver Games and brought home silver from Sochi in 2014 in the 5,000m relay. Celski, 27, was among the Northwest's best hopes to bring home a medal from PyeongChang, but he came away empty handed in the wild, unpredictable sport of short track.

"Although I didn’t get a medal this time, I know that I did everything in my power to get here and put it all on the line," Celski posted on social media Saturday. "In the face of victory or defeat, I hope that I was able to send a message that overcoming the obstacles that stand before us really is the true testament to who we are."

As previously noted, Ferguson finished one spot off the podium in a dramatic men's halfpipe competition. Ferguson, 22, didn't appear outwardly crushed by the result when he posted a photo and comment around the time he checked out of the Olympic Village a few days after the event.

Ford, 28, is one of several Mount Bachelor ski team alums on the U.S. Ski Team. He raced in the 2010 Vancouver Olympics, but missed the 2014 Sochi Games due to a severe leg injury suffered the year before. Ford competed in one event, his specialty, the giant slalom. He placed 20th in a race won by the Austrian great Marcel Hirscher.

Johnson's rookie performance at the Olympics -- and her reaction to her performance -- suggests we will see her racing on the world stage a lot more. The 22-year-old, who was raised in eastern Idaho, finished the harrowing downhill in PyeongChang in seventh place. Johnson also raced in the Super-G, where she placed 14th.

Johnson posted on Instagram that she was "super proud" of how she skied at the Olympics.

"I put my heart on the line and in both Olympic races skied the run I wanted to ski. I can’t do better than my best," Johnson wrote. "This experience has inspired me to work to make my best better and make my better the best!"

The 30-year-old former University of Idaho track standout from Gresham planned to begin medical school in 2012. But then he attended a U.S. bobsled federation tryout at Lake Placid just for the heck of it in the summer after completing his undergrad education. Michener performed so well he secured an invitation to join the U.S. development squad. Subsequently, years of practice and training led to his first Olympic team nomination this winter.

Michener was the brakeman in the four-man bobsled piloted by Nick Cunningham, a 2008 graduate of Boise State University. Their sled placed 19th in the four-man competition.

There was some question whether this 29-year-old Mount Bachelor ski team alum would make her second Olympic team because Ross suffered a severe knee injury in March 2017. Her hard work on rehab paid off with a nomination to the 2018 Olympic team.

Ross finished in 15th place in her best event, the Super-G. She also got to race in the downhill when teammate Mikaela Shiffrin pulled out and Ross finished 15th there as well.

Ross reflected afterwards that the finish rankings didn't matter to her this time.

"I knew it would be a push to try and recover in time for the Olympics. After talking to my therapist many times and persuading my doctor to let me push the protocol (to extremes), we decided to go for it," Ross wrote on her Olympics blog. "I have to keep pinching myself to remember that this is real. This is what I worked so hard for. And the experience in itself is the reward. I feel so lucky." 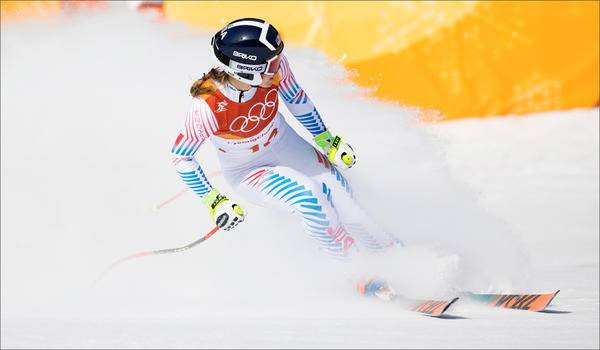 Tran said he has followed in the footsteps of his hometown buddy J.R. Celski, attending the same public schools six years apart and taking up inline skating before transitioning to ice skates. It led this 21 year old all the way to the Winter Olympics.

Tran competed in three events. He advanced through the heats in the men's 1,500m to finish fifth in the "B" final. He was eliminated in the first round of the 500m heats and raced with Celski on the U.S. men's 5,000m relay team, which finished in fifth place.

Northwest-raised, but on foreign teams

In addition to the Team USA members, four other athletes raised in the Pacific Northwest competed at the 2018 Winter Olympics under other nations' flags.

Team Australia named a snowboarder who lives in Bend, Oregon, to its 2018 Olympic squad. Kent Callister, 22, finished tenth in the men's halfpipe competition, similar to his result four years ago at his first Winter Games when he placed ninth. Callister has dual citizenship because his father is Australian, but he was born in the U.S. and mostly grew up in Bend.

Snowboarder Vic Wild, 31, made a return trip to the Winter Olympics representing Russia. The defending Olympic champion in snowboard parallel giant slalom was eliminated in the quarterfinals in PyeongChang. This White Salmon, Washington, native learned to ski and snowboard at Mount Hood Meadows. He took Russian citizenship after marrying a Russian snowboarder in 2011.

Alpine skier Jeffrey Webb 19, of Lake Chelan, Washington, was the first alpine skier ever to represent Malaysia at the Winter Games. He competed in the men's slalom and giant slalom. Webb placed 68th in the giant slalom and did not finish the tricky slalom, a fate shared with a great number of the other slalom racers. Webb graduated from Manson High School in 2017. He trained with the Mission Ridge Ski Team outside Wenatchee. Webb was coached in PyeongChang by the Mission Ridge team director. Webb's father is from Chelan and his mother is Malaysian.

Filipino-American skier Asa Miller finished two spots behind Webb in 70th place in the giant slalom. Miller, 17, was born in Portland, is now a senior at Lincoln High School and trains at Mount Hood. He has dual citizenship in the U.S. and the Philippines because his mother is Filipino. Miller, one of two Filipino athletes at the Games, carried the Philippine flag during the Opening Ceremony.