Looking over the edge of a Columbia River Gorge slope, you can see the river more than 2,000 feet below. A former aluminum smelter sits to the left at the bottom of the cliff. Wind turbines spin nearby lining the cliff’s edge.

This site near Goldendale, in Klickitat County, could one day help solve a downside of current renewable energy technology: reliability. But it’s not without controversy.

The Goldendale Energy Storage Project would be the largest of its kind in the Northwest. It’s an old technology that’s recently received a lot of study and interest from companies looking to build energy storage projects in Washington, Oregon and Idaho.

“If we want to have a green and clean power system, we definitely need a lot of storage,” says Vladimir Koritarov, a program manager at Argonne National Laboratory in Illinois.

Here’s why: Many states – including Oregon and Washington – have set renewable energy goals. But, there’s a problem. The wind isn’t always blowing, and the sun isn’t always shining. That’s why wind and solar power are variable, or intermittent.

Storage facilities, like pumped hydropower or batteries, can keep some of that energy “on tap,” Koritarov says, and then release it when it’s needed.

“Storage will be key for a high level of variable renewables in the system and effectively operating the system,” he says.

Pumped hydropower is an old technology. To make it work, there are two reservoirs, typically one high up on a hilltop, the other down below. When there’s a lot of electricity available, water is pumped from the lower reservoir into the higher one.

Then, when more electricity is needed, the water in the upper reservoir is released through turbines and back into the lower reservoir.

How pumped hydro works with an upper and lower reservoir. Courtesy of Tennessee Valley Authority

“Why is pumped storage hydro really good for large-scale applications?” says Koritarov, “Because of the size.”

Different types of storage are good for different applications – and there will need to be a mix of pumped storage and batteries to properly integrate renewable power onto the grid, says Vish Viswanathan, an energy storage researcher at Pacific Northwest National Laboratory in Richland.

“I like to use the analogy of marathon versus a sprinter versus a middle-distance runner,” Viswanathan says.

Smaller lithium-ion batteries generate energy for shorter amounts of time, like a sprinter. Another type of battery called a flow battery is more of a middle-distance runner. And, pumped storage, with its large reservoirs, would be a marathoner.

Pumped storage operates at more of a utility-scale. There are already at least 40 pumped hydro plants in the U.S., many in the East. Very few new plants have been built in 30 years.

Most of the new pumped hydro projects have been proposed in the West, according to the U.S. Department of Energy. At least four new plants are proposed in Washington, two in Oregon, one in Idaho, and two in Montana.

Washington already has one pumped hydro plant near Grand Coulee, which started generating energy at a portion of the pumping station in 1973. Before that, it delivered irrigation water to the Columbia Basin Project.

Investors often have to study several locations before they decide where to site a pumped hydro facility, says Kendall Mongrid, an economist with Pacific Northwest National Laboratory.

She says many facilities might be proposed in the region because “it fits the correct profile where it’s actually going to provide a valuable need while also providing a return.”

But there are drawbacks. The application process can be lengthy and expensive.

Recently, Washington Reps. Cathy McMorris Rodgers and Dan Newhouse have introduced legislation that would further speed up the permitting process for those types of closed-looped pumped hydro systems. Permitting and construction can take up to 10-years for these types of projects, making them costly and time-consuming for investors.

Kurt Miller, with Northwest RiverPartners, says it’s important to fast-track some of these “low-impact technologies that will help be an important contributing factor to our clean energy goals.”

Researchers at PNNL say getting investors to buy in quickly is important, but environmental regulatory steps shouldn’t be skipped.

At least four new pumped hydro plants are proposed in Washington, two in Oregon, one in Idaho, and two in Montana. 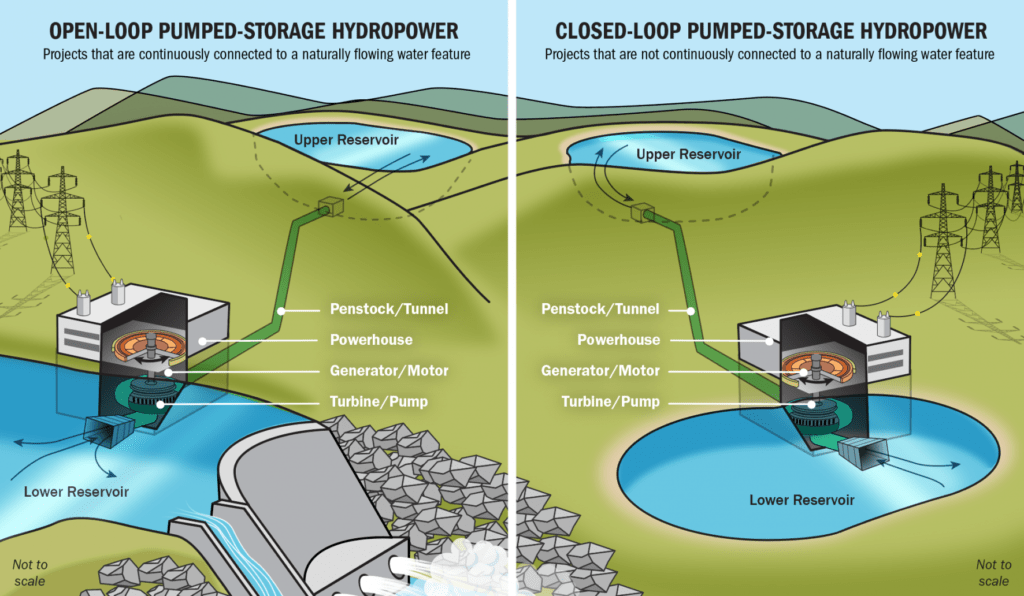 The pumped hydro project near Goldendale is one of the first in the country to apply for an expedited licensing process with the Federal Energy Regulatory Commission.

That concerns some groups who have opposed the project. Like many large energy projects, the Goldendale project is not without complications.

The Yakama Nation has opposed the Goldendale facility from the start. They say the site footprint would impact sacred cultural resources, “including archeological, ceremonial, burial petroglyph, monumental and acestoral use sites,” according to Paul Ward, Yakama Nation Fisheries Program manager.

“As you’re aware, the Columbia River was dammed over the last century. In doing so, that impacted many of our rights, interests and resources,” Ward said at a Washington Senate committee hearing earlier this year. “All of these things have been impacted: our fish sites, our villages, our burial sites up and down the river. This is another example of energy development, development in the West, that comes at a cost to the Yakama Nation.”

Similar concerns have been raised for a much smaller “hydro battery” project on the Upper Columbia River. The Confederated Tribes of the Colville Reservation recently sent a letter to federal regulators stating they didn’t believe their concerns about cultural resources that would be harmed by the project were being heard.

“We reiterate to the Commission the cultural significance of the location selected for the Project and highlight areas where our concerns were ignored or minimized based on the inherent ethnocentric bias in the (Federal Energy Regulatory Commission) process,” the letter states.

The Colville Tribes would like the developers, Shell Energy North America, to consider alternate locations for the project, which would test out a small-scale modular type of pumped storage facility.

At the site of the Goldendale project, the Yakama Nation also has concerns about the facility’s location near an old aluminum smelter. Project developers say the storage reservoirs would not be built in contaminated areas.

Other groups have also raised concerns about golden eagles that nest nearby. They say the birds already run into trouble with a nearby wind farm – one of the largest wind projects in Washington. They’re also concerned about the amount of water the project would initially take out of the Columbia River.

The federal environmental process to study those plans is expected to begin this fall.

“We are very interested in developing an environmentally benign project that’s a great benefit to the community. To that extent, we proposed a project we feel has very limited impacts on the landscape,” Erik Steimle, with Rye Development, says.

The project has received strong support from the Klickitat County Public Utility District, where it would purchase its water rights to initially fill the reservoirs and periodically make up for water that’s evaporated or potentially leaked. It’s also seen support from the Goldendale Chamber of Commerce and county commissioners, who’ve called it “a game changer in Klickitat county and the whole region.”

“This particular site has been studied for pumped storage for more than 30 years,” Steimle says. “It’s identified as one of the best locations in the United States from a grid connectivity standpoint. It also has good geology and geography to support a project.”

Steimle says project developers expect a decision on the permit application in 2022. Rye Development and National Grid have already received a federal license for another pumped storage project near Klamath Falls, Oregon. If built, Swan Lake North would be the largest pumped storage project in the region – that is, until the Goldendale project potentially comes online. It would be around triple the size of Swan Lake North.

At a time when states are trying to reduce their dependence on fossil fuels that release heat-trapping greenhouse gases, new storage projects could be an important step forward, according to Argonne National Laboratory’s Vladimir Koritarov. But, he says, pumped storage is only one of the steps.