Organizers of the next FIFA Women's World Cup hope to leverage the unusually high interest in this year's men's tournament in Brazil to their benefit. Group play and the 2015 World Cup final will take place just across the border in Vancouver, Canada. 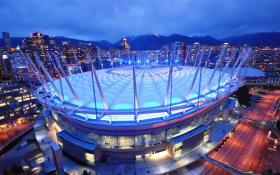 Vancouver is one of six host cities in Canada for the Women's World Cup next summer. Nine matches including the final will be played at the 55,000-seat BC Place stadium over the span of a month. The other 2015 match venues are in Edmonton, Winnipeg, Montreal, Ottawa and Moncton.

Rita Rogers, general manager of the Vancouver venue, said the host committee plans to market to fans in the U.S. Northwest.

Oddsmakers give a decent chance for a Canada vs. USA showdown in the final. That should be of heightened regional interest because the U.S. and Canadian national teams likely will feature stars now playing in the Northwest. Team USA's Alex Morgan and Team Canada's Christine Sinclair are with the Portland Thorns and the Seattle Reign have USA goalkeeper Hope Solo.

The Women's World Cup unfolds between June 6 and July 5, 2015. Twenty four countries will play in the upcoming tournament, up from 16 the last time around. Japan is the reigning women's champion.

Tickets for the Women's World Cup go on sale on September 10. Purchasers of preliminary round ticket packages will have the first shot at buying coveted tickets to the World Cup Final.

"That's an important piece, because that's the one match we don't have to worry about selling (out)," Rogers said.