According to the June jobs report released Wednesday, Washington’s jobless rate has dropped to 5.8 percent -- the lowest level in six years. 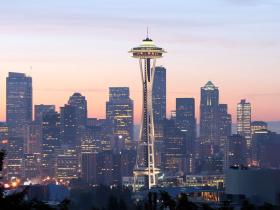 Seattle’s King County is leading the recovery, but most Washington counties remain above the statewide average. And some rural counties of the state are much higher.

As of May, two Washington counties still had jobless rates over 10 percent: Grays Harbor on the coast and Ferry County in northeast Washington.

Kerry Burke, a regional manager for Washington’s jobs program, oversees Ferry County. He said King County’s job growth is actually good for the people in his rural pocket of the state.

“We can say, 'King County is looking for workers, would you want to consider that?' That’s an option," Burke said. "The other side of that one is when King County starts showing good signs, our area eventually follows.”

Burke said there are signs of a slow job recovery in northeast Washington. Unemployment is down nearly 10 points in Ferry County since the peak of joblessness in 2010.