Wildfires continue to rage around the Northwest. and forecasters say weather conditions are ripe for more fires to develop in the coming days. 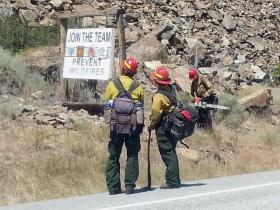 The Mills Canyon fire in central Washington has charred 35 square miles. In Oregon, the Moccasin Hill fire has destroyed at least six homes near Klamath Falls.

It's hot. It's dry. And there has been thunder and lightning in the region as well. In Oregon alone, lightning struck the ground more than 6,000 times on Sunday. This phenomenon can spell trouble for the days ahead. A lightning bolt might not start a fire right away. Instead, it can strike some sort of ground fuel and smolder for a few days. When temperatures rise into the upper 90s, these so-called sleeper fires can quickly accelerate.

"These sleeper fires are going to flare up and start appearing," the Northwest Interagency Coordination Center's Robin DeMario said. "So each day this week we anticipate encountering more and more fires resulting from the lightning that occurred on Sunday."

DeMario said people who see low-level smoldering shouldn't hesitate to call 911 since it might be the sign of a much larger fire to come. Temperatures are expected to top 100 degrees in much of the inland Northwest during the middle part of the week.