The first legal marijuana stores in Washington are scheduled to open Tuesday. The Liquor Control Board issued the first 24 retail licenses early Monday. 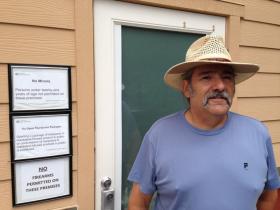 But state officials warn of high prices and short supply in the beginning. Even so that’s not keeping away some would-be customers.

420 Carpenter is a recreational marijuana retail location that has received its license – one of the first in the state. There’s a surveillance camera out front. The deadbolt is locked. And nobody is answering knocks at the door.

The location seems out of the way in the back of an office park.

Bobby Johnson, who was scouting this location on behalf of some local users of the social networking site Reddit, said, “It’s very nondescript, but I’m sure everyone will know where it’s at very soon.”

The store's owner said he plans to open on Friday. Johnson said he’d like to be one of the first customers.

“I might drive by and see if there’s an insane line," he said. "If there’s not then, yeah, I probably will.”

Another would-be customer, retiree Rick Stevens, said he has used marijuana medically for a bad back. Now he’s ready to become a recreational user.

"It makes food taste better and music seems to sound better and all of those things," he said.

But Johnson said, “I’m a little more excited about the edibles -- once that becomes available. I’m not really a big smoker.”

Eventually, legal pot shops will sell edibles. But that part of Washington’s nascent legal, recreational marijuana marketplace isn’t ready yet. For that matter, much of the legal pot crop isn’t either.

Randy Simmons, deputy director of Washington Liquor Control Board, called it "a real issue," and he expects some grumbling.

“I would just say give it time," he said. "This is day one of this infant starting to walk.”

Simmons also said the state will be running stings to make sure stores don’t sell to underage customers.