It won’t just be Boeing jetliners flying lumbering test patterns over Moses Lake, Washington. Japan-based Mitsubishi Aircraft announced Monday it has selected Grant County International Airport as its U.S. test flight center to test its new 70 to 90 passenger regional jet. The test flights could start in the fall of 2015. 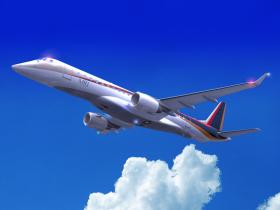 That means a new high-tech airplane hangar and an estimated 100 jobs for the central Washington community.

Moses Lake is ideal for these test flights with its rural location and unusually sunny weather. The airport is also a former U.S. Air Force Base with long runways.

Governor Jay Inslee attended the announcement at the Farnborough International Air Show in England. He later spoke to reporters on a conference call.

“We think it opens up a whole new horizon of really getting into the certification and testing business, if you will, because it will give us an infrastructure in Moses Lake that can provide this service to other aircraft manufacturers as well,” Inslee said.

Inslee is attending the air show this week with a delegation from Washington state. His staff said it hopes the trip pays dividends in the coming months with more announcements about new aerospace jobs coming to Washington.