Eric J. "E.J." Iannelli took over SPR's Arts & Music Director role full-time at the beginning of August. Iannelli brings a world of music, arts and journalism experience to the role.

Iannelli has more than 20 years of experience with content creation in the media, advertising and language industries. He has worked largely as a freelance journalist, copywriter and translator since 2000. As part of his journalism work, he has interviewed artists of all kinds on a regular basis for various publications here in the US as well as in England.

Locally, Iannelli has been a contributing writer to The Pacific Northwest Inlander and its family of publications for more than a decade. He has frequently covered theater, music and literature in addition to occasional community and health stories.

Iannelli said he hopes to broaden Spokane Public Radio’s coverage in order to get the full scope of performing arts in the region. In addition to covering public radio staples like classical and blues music, Iannelli hopes to add rock and hip hop-oriented coverage to the station’s airwaves.

Iannelli succeeds Verne Windham, the long-time program and music director of Spokane Public Radio, who, over the past 38 years, helped shape the station and its community.

“I really want to honor the legacy that Verne left here,” Iannelli said. “I am succeeding him and hoping to continue all the benefits of his tenure here, but augmenting the position in different ways, too.”

Learn about E.J.'s personal taste in music and how his work may differ from his predecessor's here:

SPR Arts & Music Director, E.J. Iannelli, shares his taste in music and explains how his work will differ from his predecessor's

Hear about E.J.'s involvement in his community here:

SPR Arts & Music Director, E.J. Iannelli, tells about his involvement in his community

Keep an ear out in next few weeks to hear E.J. on the air! 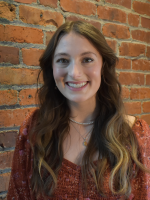 Savanna Rothe
Savanna graduated from the University of Idaho with a degree in journalism in spring 2020. She has worked in marketing and digital storytelling since 2017.
See stories by Savanna Rothe