Ice on the Omak Transmitter

We received several reports of loss of reception in the Omak and Oroville/Tonasket areas.

A look at the telemetry for KOMQ in Omak showed exceedingly high reflected power. Experience tells that this is usually an antenna icing problem. Ice buildup on the antenna changes the tuning of the antenna and makes it a poor impedance match for the transmitter.

We made plans with KSPS Channel 7 for a trip to the site, as they were also off the air at Omak. KSPS has recently obtained a snow vehicle that made the trip possible. This vehicle, as good as it is, isn’t everything that was needed. The transmitter site is on the Colville Reservation and required heavier equipment to open the road. In a cooperative action with Okanogan TV District 1, The Okanogan County Sheriff’s Office, and The Federated Tribes of the Colville Reservation, the sheriff’s crew proceeded our expedition with a snow-cat equipped with a plow. They were able to cut a road through the snow which we were able to later follow with the snow vehicle. When we met them at the top, they had been able to get to within about 100 yards of the building before the drifts got too gnarly.

We took the last bit on foot, crawling over the final snowdrifts. When we got to the building, the problem was apparent. The tower holding our KOMQ broadcast antenna (and a few other translators) had folded over and was lying on the roof of the building. A similar tower at this site collapsed last year. The repair is going to require putting up a new tower. Such a tower was ordered and delivered last year but is still awaiting the proper permits before it can be erected.

The rest of the bad news is that the Omak transmitter is the audio source for the Oroville/Tonasket transmitter. So, for now, both stations (KOMQ 88.5 and KPBG 90.9) are down until we can install some work arounds.

The one bit of good news is that Channel 7’s antenna was on a different mast and an equipment swap got them back on the air.

My special thanks to Shannon Wright of KSPS, Mike Worden of Okanogan County, and Frank “Duke” Yazzie Jr. of the Colville Tribes. 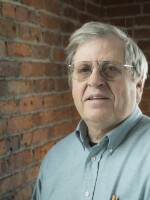 Jerry Olson
Jerry Olson is a native of Cleveland, Ohio and graduated from the University of Cincinnati. In addition to his technical career, he is also a musician who has played tuba and bass trombone with the Berkeley (CA) Symphony and numerous other groups, including the Spokane Symphony. In a previous life, Jerry was a semiconductor engineer in Silicon Valley but in 1989, he and his family moved to Cheney in order to pursue a saner lifestyle. Results have been mixed ...
See stories by Jerry Olson