The Idaho Transportation Department has suspended advertising for bids for future highway projects. Oregon and Washington may soon do the same. 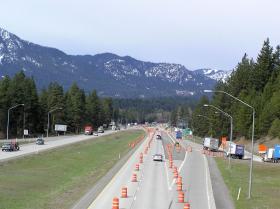 In the past, Congress has patched the gap with transfers and borrowing. But this year, conservatives are warning "no more." In response, the Obama Administration is warning states that starting next month they may get less federal highway construction money.

Oregon Department of Transportation Assistant Director Travis Brouwer said his agency will essentially float a loan to the federal government to keep contractors and workers active.

"We have sufficient cash reserves for at least a short period of time," he said. "We're not quite sure how long, but we should be able to weather a couple months lapse in federal funding."

The uncertainty about future funding caused the Idaho Transportation Department in mid-June to suspend advertising for bids on a half dozen planned projects. Spokesman Reed Hollinshead said his agency has been sufficiently frugal -- and has enough near-term clarity on federal reimbursements -- that it will resume bid solicitation next week.

"We are still making assessments," WSDOT spokesman Lars Erickson said. "We are looking at projects that might be at risk... on a case-by-case basis."

"We are optimistic Congress will take action as they have every time the Highway Trust Fund has approached insolvency," he added.

Congressional committee chairman from both parties -- including Oregon Senator Ron Wyden -- are trading ideas for short-term fixes to head off the crisis.