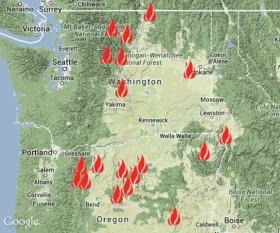 That announcement came as Obama touched down in Seattle on a fundraising trip.

Governor Inslee rode with President Obama in his motorcade. He said he showed the president a map of the fire damaged areas and they discussed the need for more federal help.

Inslee said Obama has agreed to an immediate emergency declaration. The Democratic governor says a top priority is restoring power in the fire-affected areas.

“Finding very large generators, finding a way to restore the local distribution system to use those generators, using Army Corps of Engineers, we are going to get some federal assistance of dimensions yet to be determined," Inslee said. "I’m very appreciative of the president’s very rapid action on that.”

Inslee said after the damage assessments are complete, the state can request a federal disaster declaration. That would free up aid for fire victims.

Inslee said the President also called the widow of a retired state trooper who died of an apparent heart attack while trying to protect his home from the fires.

Inslee’s office said the governor also planned to attend two fundraisers with the president during Obama’s short stopover in the Seattle area.