From a project in George Cole’s Basement to its 5th year, a note from Susan Wallace, President of the Board, about the history of KPBX.

Sidran on Record is a 13 week series looking at new releases.

Radio begins at 5 a.m. instead of 6, starting Feb 4, with Morning Edition.

Vintage Jazz from the Vineyard, midnight - 1 a.m. on Saturday nights.

Celebrating 300 years of Bach, programming for his 300th birthday on March 21, as well as a benefit from the American Guild of Organists at Messiah Lutheran Church.

KPBX presents Don Giovanni and The Magic Flute at the Magic Lantern.

Article on Noah Adams, “the Indiana Jones of Public Radio.”

New series Jazz at the Institute and Now Nordine.

New show: A Private Space: The Personal Diaries of Women. 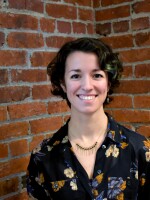 Leona Vander Molen
Leona Vander Molen moved to Spokane in 2017 for graduate school and couldn’t bring herself to leave due to the sun, scenery, and community. She grew up in Columbus, Ohio, and attended Denison University for a BA in English and Psychology. Following graduation she moved to Japan for a year as a part of the JET program, and taught as an assistant English teacher on the island of Awaji. She returned to the US to pursue an MFA in creative writing, which she received from Eastern Washington University. While listening to Spokane Public Radio Leona likes to knit, pet her cat, or drive to the nearest bakery for a bagel or five.
See stories by Leona Vander Molen